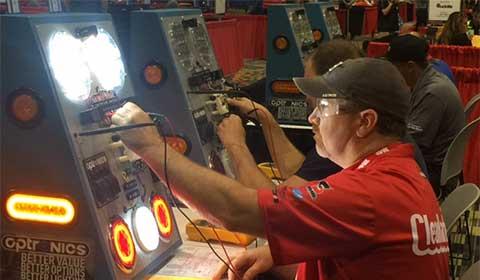 Four of Clean Harbors' most talented mechanics made it to the finals of the annual SuperTech Competitions late this summer -- a feat made all the more impressive considering it was Clean Harbors' first foray in the prestigious event.

Gary Sandridge from the Bakersfield, Calif., branch, Eric Howard out of Kingston, Mass., Kevin Korpela from Fort McMurray, Alberta, and Brian Cale out of Bonnyville, Alberta made the trip to Orlando on Sept. 16 for the national three day competition hosted by the Technology and Maintenance Council (TMC). The foursome went up against 150 competing teams on their way to the finals.

Started more than a decade ago as a way to recognize the industry's premier technicians, the competition is often dominated by mega-corporations -- like FedEx, UPS and WalMart -- with large teams.

"I didn't expect to make it to the finals, to be honest," said Ginn Velez who, along with Bill Lindsay, coached the team. The small Clean Harbors contingent didn't know what to expect going in, she said, and only undertook minimal training for the contest. "It was definitely an inspiring event with many opportunities for professional development."

Most of the competition was hands on, with teams given faulty mechanical systems to diagnosis and fix. They're judged on a basis of speed and quality of work. A written test also ascertained systems knowledge. Accompanying the Clean Harbors team to Florida was Senior Asset Manager Mark Gangemi, who served as a competition judge.

With consideration from hub managers from around the company, the Clean Harbors representatives were chosen after completing a questionnaire. Velez hopes to expand the team for next year, train more for the contest and compete in local and state qualifiers.

Given the year of experience under their belt, she said the 2018 team will be able to build on its rookie success and develop a clear strategy.

Beyond the competition, the event also provided networking opportunities with fleet maintenance companies and suppliers and promoted professional growth.

Velez said the team members -- the best of the best in the company -- were actually surprised about how much they didn't know and were eager to join online training courses to bolster their already expert knowledge base.

"Clean Harbors is investing in our employees," she said, "and is elevating them to world-class mechanics."