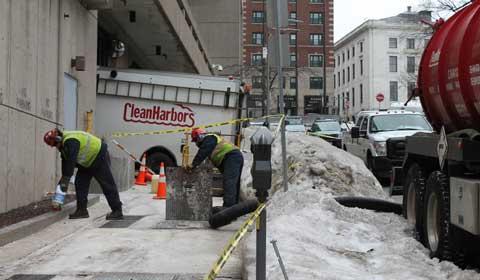 Throughout the winter, Clean Harbors helped people, businesses and the government in seasonal clean-up across the United States and Canada. After what was a seemingly endless winter, here are just some of the stories:

Clean Harbors responded to a Massachusetts wharf where a lobsterman was trapped by power lines downed by a March 13 blizzard. Following the rescue, crews cleaned up oil spilled from the lines' destroyed transformers.

The same March blizzard caused a sailing building on the Charles River in Cambridge, Mass., to begin sinking. Clean Harbors crews responded to the restoration effort to protect the river from any potential pollutants. Read full article

Clean Harbors responded to a crash in Maine on March 15 in which a fuel tanker driver hit a snowy shoulder, crashed and spilled approximately 800 gallons of diesel.

Clean Harbors workers spent a frigid weak in January on decontamination, vacuum and other jobs after a massive main break on Nantucket that discharges more than 2 million gallons of sewage into the harbor and onto public streets. Extreme cold was speculated as a contributing factor.

In March, Clean Harbors crews worked at the McKenzie River in Oregon helping to contain an oil spill from a paper plant.

Clean Harbors deployed booms and absorbent pads in Great Harbor off of Woods Hole in Cape Cod on Jan. 21 to contain a mystery oil spill.

Clean Harbors crews worked at a state government building on March 16, cleaning up from a burst pipe.

Clean Harbors aided in a mission to inspect a sunken tugboat off the coast of a Maine in late February.