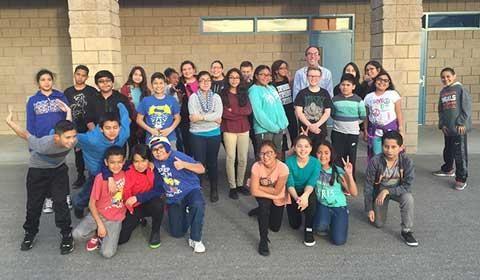 Heeding the call of environmentally-focused fifth graders in Las Vegas, a Clean Harbors employee helped educate the class about sustainability and is now giving them a hand in setting up a school-wide composting program.

Clean Harbors Field Services Account Manager Tom Murphy spoke to the class for the first time in February. Students wanted to set up a system of boxes to separate waste, food waste, plastic and paper at their school.

"These kids were so excited and so eager, they came up and gave me a hug before they had even met me just because the teacher said, 'there's someone coming who's going to help you guys with what you want to do.' It was just hilarious," said Murphy. "I met with them and answered an hour's worth of questions, there were 36 kids. They were very knowledgeable about pollution, greenhouse gasses, batteries, etc. Much more than I ever would have guessed they would know."

As it turns out, the school's disposal provider was sorting the trash after collection. The kids were recycling without even knowing it.

Unfulfilled, the class still wanted to do something themselves to promote a greener school and Murphy was determined to help.

After meeting with the school's service provider, the idea of composting came about.

"They didn't all know what composting meant, so they were somewhat curious, but as soon as I said 'sustainable garden,' oh man, that class perked up," Murphy said.

On average, grade schools throw away approximately one yard of waste and three yards of potentially compostable food waste daily - if the school successfully converts all of its food waste to compost, they will reduce waste and costs by 75 percent.

Murphy reached out to the University of Nevada Las Vegas recycling program, which donated compost kits to the newfound effort.

With the plan now in motion, the class will conduct a school assembly soon to kick off their project. The students are to run the compost operation, man the bin stations at lunch and mix the compost after school in the garden.

Murphy received praise from the Nevada Department of Environmental Protection and the Clark County Health Department for his support of the school. This isn't the first time the 6-year employee has volunteered his time for a good cause. On weekends, Murphy teaches life skills and job readiness at The Shade Tree, a shelter for women who have been victims of domestic violence. He's also worked to reduce waste and recyclables at the shelter's cafeteria, which serves approximately 400 women and children three meals each day. Additionally, he coordinates with UNLV on recycling initiatives.